Over the past few years imaging genetics is a hot topic in brain research. Extracting large amounts of quantified information from medical images is a field of interest for many researchers engaged in medical image analysis. Imaging genetics focuses on the specific task of linking imaging phenotypes with genotypes, gene expression patterns and other “omics” data. In other words, developing algorithms that are able to provide genetic information based on medical images alone.

Gennady Roshchupkin investigated the application of imaging genetics to MRI brain scans. Linking local gene expression in the brain to MRI images can give insight to which alleles of Alzheimer’s disease (AD) related genes influence very specific parts in the brain. Insights that can aid future functional studies.

Roshchupkin’s approach combined the specific technique of voxel-based morphometry with gene expression profiles post-mortem obtained from 6 brains in Allen Brain Institute. We will explain the process in this blog post.

Voxel-based morphometry: imaging genetics applied
To deploy MRI to compare brain tissue at the smallest possible level, the voxel level, one can apply voxel-based morphometry (VBM). VBM performs a voxel-wise comparison of multiple MRI images to compare local tissue concentration.1 But how does VBM work? We will explain the technique in 4 steps using Roshchupkin’s research as an example.

Before being able to do anything, you need a sufficient amount of the right data. Roshchupkin used 4071 brain MRI scans from non-demented individuals included in the Rotterdam Scan study.

To compare these MRI scans in an “apples for apples” way every brain scan needs to be registered to a brain template. Such template shows an average of a set of brain scans, creating a map of the brain that can function as a baseline for further research. Roshchupkin used the template from the Montreal Neurological Institute (MNI) for registration. This operation will align all scans and allow to compare them voxel-by-voxel.

To really grasp the bigger picture and avoid a very noisy end result, all voxels in every image need to contain information about their neighbor. Roshchupkin applied a smoothing algorithm which replaces the value of each voxel with a (weighted) average value of all its neighbors.

As a last step Roshchupkin calculated clusters of voxels in grey matter. To obtain clusters, first a linear regression analysis was performed to determine for each voxel a value, the p-value, that represents the strength of the relationship between grey matter (GM) density and the AD variant. Clusters are then formed based on these p-values by setting a threshold and simply checking which voxels are above and which are below this threshold. As the clusters are defined using AD variant information, they are likely to be correlated with gene expression of AD associated genes. 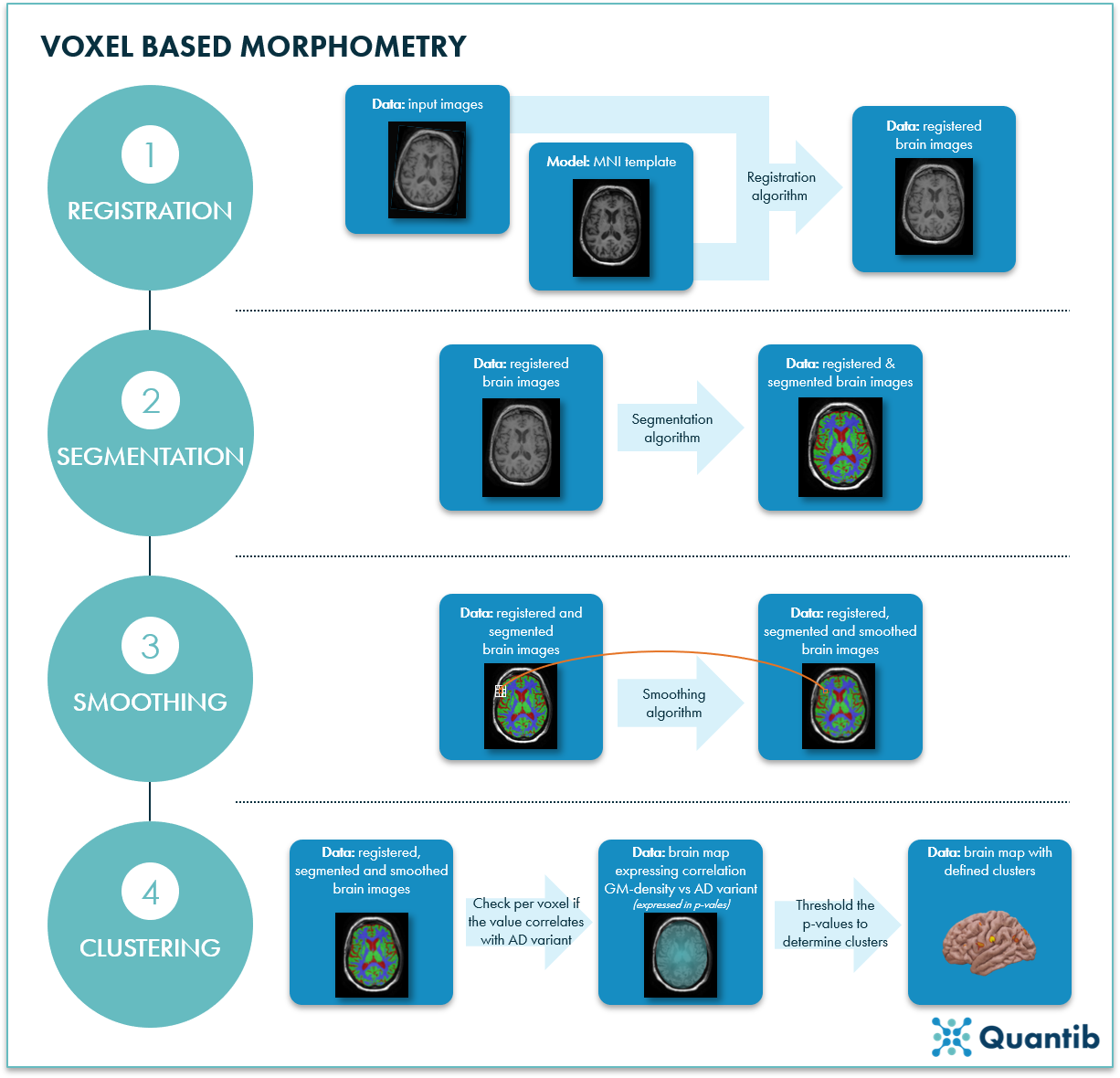 Figure 1: Voxel based morphometry can be done in 4 steps. 1) Registration. A registration algorithm compares an image to the MNI template, then transforms the input image to align it with the atlas. 2) Segmentation. A segmentation algorithm determines which pixels are white matter, gray matter of cerebrospinal fluid. 3) Smoothing. For each voxel (orange box) in the image you take the average of the surrounding voxels (white boxes) to assure each voxel contains information about its neighbors. 4) Clustering. Clusters are determined using linear regression to correlate grey matter density (GM-density) with AD variants and thresholding the voxel values.

Now that we have a dataset that consists of a set of defined clusters covering specific brain areas, we can start connecting these areas to gene expression of AD associated genes.

Roshchupkin used the Allen Human Brain Atlas to do so. This atlas contains samples from around 500 locations (per subject, per hemisphere) post-mortem collected from 6 brains. For this specific research 3 subjects were selected and for each subject 19 carefully selected loci were studied and gene expression profiles were determined. The selected loci are associated with a high risk of AD.

Figure 2: Voxel clusters are linked to gene expressions based on the MNI template to determine which areas in the brain are related to AD associated loci.

So what did Roshchupkin’s research prove?