Current predictions estimate that dementia is slowly developing – invisibly –- within the brains of 35.6 million people worldwide1. That number is growing yearly, but despite its high prevalence and impact on patients’ lives, dementia remains vastly underdiagnosed. Due to the wide range of related yet clinically different syndromes, developing sufficiently specific and sensitive clinical criteria to identify and discriminate them is proving increasingly difficult. Neuroimaging is proving to be central in this pursuit. With recent advances in CT and MRI, combined with quantitative analysis using artificial intelligence (AI), better insight into dementia may only be a scan away.

The origins of neuroimaging

In the early 1900s, the first attempts at neuroimaging used a technique called pneumoencephalography. This technique involved withdrawing cerebrospinal fluid (CSF) via lumbar puncture and then replacing it with a gas (usually air) to outline the cortical surface and cerebral ventricles using X-ray roentgenography2. In the 1970s and 1980s, modern imaging techniques were developed, ushering in an age of more accessible, safer, non-invasive, painless, and (to a reasonable extent) repeatable neuroimaging2. These techniques include computed tomography (CT) and magnetic resonance imaging (MRI), which over the last decades have made significant advances in increasing spatial resolution, reducing noise and artefacts, and improving low-signal performance in scans3. These advances, combined with AI protocols, promise to bring a new revolution to neuroimaging.

CT and its role in dementia diagnosis

With the advent of computerized axial tomography (CAT or CT scans), highly detailed three-dimensional anatomical images of the brain are becoming readily available for diagnostic and research purposes. Consequently, the number of CT scans performed globally has also increased, with 3 million performed in the 1980s to 62 million performed in 20074. A proportion of this number can be explained by guidelines by the UK National Institute of Health and Care Excellence (NICE) and European and US diagnostic guidelines which now recommend evaluation of patients with suspected dementia to include structural imaging using non-contrast-enhanced CT or MRI5–7. The use of neuroimaging has thus shifted from solely the exclusion of potential secondary pathologies (such as cerebral tumors) to also investigate neuroanatomical features, which could help support a clinical diagnosis of the underlying cause(s) of dementia8. While currently there are no neuroanatomical features which provide perfect specificity and sensitivity for any given dementia syndrome, several structural patterns or signatures may provide positive predictive value and help physicians and clinicians narrow the differential diagnoses to most likely underlying pathologies9.

As a first-level examination of dementia, CT imaging is now often required6,10–12. While the technique is frequently regarded as “old fashioned”, it remains a valuable tool in detecting potential secondary, sometimes treatable, causes of cognitive impairment13. Typical examples include intracranial neoplasms, subacute and chronic subdural hematoma14, or normal pressure hydrocephalus15, to name a few. However, while CT is less sensitive than MRI in detecting cognitive impairment related changes, its value in some circumstances or centers revolve around its greater availability, lower cost, shorter acquisition time, making it adaptable to patients with poor compliance, and its utility for patients with metal devices, such as a pacemaker13.

Most advances of the past few years have been within the scope of PET/CT imaging. PET imaging is exquisitely suited for dementia imaging, as Aβ protein plaques, generally thought to play a major role in the biological process of AD, are relatively easy to measure using radiotracers. Additionally, tau, another protein that has been shown to be associated with cognitive impairment, can be visualized on PET scans using different tracers. Hence, further development and improvement of tracers has been the aim of promising research during recent years showing the ability to provide pathologic staging19.

In the late 1970s, the first head and body images were obtained using MRI. Since then it has become a widely used clinical imaging modality providing neuroradiologists and clinicians with tomographic images of excellent spatial resolution and tissue contrast. Recent advancements in the hardware and software of MRI are now focused on solving the current and future challenges of MRI; firstly, by making MRI more broadly available and applicable through faster acquisition, optimized workflows, and higher patient throughputs. Secondly, by identifying the needs of an ageing and multimorbid patient population through adaptation and tailoring of protocols and procedures; and lastly, by making MRI an integral part of modern precision medicine through the increased use of quantifiable data, defining image biomarkers and integrating AI algorithms20. 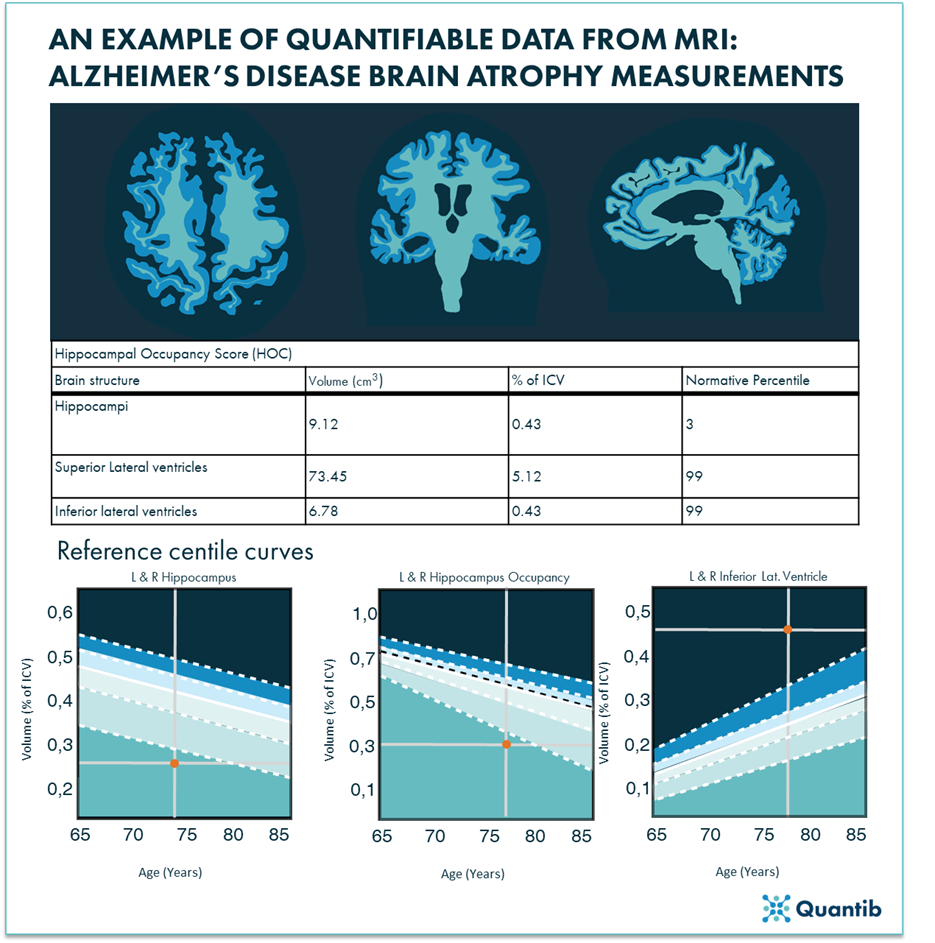 Figure 1. An example of applying MRI in modern precision medicine by deducting quantifiable data from the MRI scans and leveraging AI algorithms to compare patient results to population data: brain MRIs provide information on the atrophy rate of a patient, in this example images are representative of Alzheimer’s disease (modified from reference 21).

MRI and its role in dementia diagnosis

Diagnosis of dementia remains largely clinically supported by neuropsychological testing and aided by biomarker status determination through neuroimaging and/or CSF testing. The diagnostic certainty gained through these methods aim to provide improved prognostication and targeted symptomatic medication21. Importantly, while there is often overlapping clinical and imaging features in neurodegenerative disorders, characteristic patterns or “signatures” can be used to improve differential diagnosis22.

Increasingly vital in dementia (differential) diagnoses are structural MRIs (sMRIs). When a patient presents with suspected dementia, sMRIs aid in excluding secondary underlying pathologies, assessing brain atrophy and vascular burden, and identifying any markers or subtle changes in brain architecture to help differentiate between dementia syndromes. To this end, different imaging sequences are often used, such as T1*-weighted imaging to show characteristic patterns and signatures such as cortical atrophy, and their progression over time. Further, T2*-imaging is highly sensitive in detecting and locating microhemorrhages, bringing diagnostic clarity to underlying pathologies in different brain regions. For example, microhemorrhages in the cortical region are often Aβ-related while microhemorrhages associated with hypertension are found in deep brain regions23. Further subtle changes, such as metabolic, toxic, or infective processes, can also be visualized using T2*-weighted or FLAIR images and ultimately correlated with related cognitive deficits8. The further capabilities provided by MRI to identify and differentiate dementia subtypes through hippocampal and ventricular volumetric and shape analysis22 is greatly expanding our knowledge of the disease mechanisms.

Figure 2: Representation of how AI can provide automated quantification of brain structures and provides a differential diagnosis probability.

The next step: using AI in visualizing dementia

Given the many common features across the dementias, subtle differences in syndromes remain difficult to distinguish in CT and MRI. Thus, a diagnosis often relies on using semi-quantitative scales while relying heavily on the experience of the neuroradiologist. A correct diagnosis, however, is becoming increasingly important in an era when potential disease-modifying agents are soon to be marketed24,25. To improve the diagnostic accuracy, AI software may play an increasingly crucial role in the diagnostic process, providing quantitative measurements to support diagnosis. AI Software, such as Quantib® Neurodegenerative, offers quantified segmentation of brain structures and white matter hyperintensities (WMH). This automated process allows for tracking and comparative analysis within quantified brain volumes, atrophy assessment, and WMH volume and number. These results can then give an automated determination of the semi-quantitative scales and consequently provide a differential diagnosis within a percentage of certainty. As more data is collected, these AI systems and algorithms improve, increasing their ability to accurately discriminate dementia-subtypes. In our blog, you can also read more about advancing Alzheimer’s MRIs using AI-based quantitative imaging.

Developments in (PET/)CT and MRI hold great potential for visualizing and identifying dementia-specific signatures, possibly even before the onset of cognitive decline. While dementia is a heterogeneous disease, the improved spatial and temporal resolution of neuroimaging is on the road to identifying subtle structural and vascular pathologies, enabling better diagnostic and biomarker-based discrimination between dementia syndromes. The additional potential of combing neuroimaging with AI-powered quantitative assessment may uncover currently unknown biomarkers and provide novel insight into our understanding of dementia.